On the Day of Indigenous Resistance, communities of Oaxaca demand respect for their autonomy 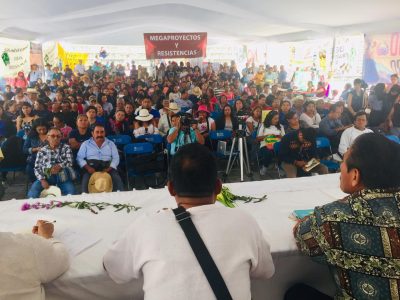 On October 12, the Day of Indigenous, Black and Popular Resistance, dozens of native peoples and communities gathered in Oaxaca City to commemorate 527 years defending their territories, cultures, languages and ways of life.

This year’s event was organized in response to a call from Mexico’s National Indigenous Congress to honor the memory of Samir Flores Soberanes, an Indigenous activist and community radio producer who was murdered this past February in Morelos state. Flores was an outspoken opponent of a thermal-electric plant and gas pipeline that form part of the Integral Project for Morelos, originally proposed in 2010 but recently promoted by Mexican President Andrés Manuel López Obrador as a way to improve the region’s energy independence. To date, no one has been held responsible for Flores’ death.

The extractive and energy projects promoted by the current administration—and the increasing risks faced by Indigenous activists who oppose them—were a prominent theme throughout the global day of action. Community defenders affirmed that despite the great hopes generated by Mexico’s first leftist leader, the threats to their lands and lives seemed only to be multiplying.

Today, Oaxaca is targeted by mining, hydroelectric and wind farm projects, many of which precede the current administration. The state is also the site of one of the president’s star projects, the Trans-Isthmus corridor, which proposes to modernize shipping ports and expand highways and gas pipelines between the Atlantic and Pacific Oceans.

Affected Indigenous communities say the plan would turn their territories into a high-speed industrial corridor at the expense of the region’s biological and cultural diversity. Moreover, they accuse the federal government of organizing “pseudo-consultations” that violate international standards and seek only to justify the imposition of mega-development projects.

In a statement, communities and organizations from Oaxaca’s Isthmus, Northern Sierra, Pacific Coast and Central Valleys regions said that 527 years after the beginning of colonial plundering, López Obrador’s vision of development “is nothing more than a new stage of savage capitalism that seeks to take over our territories.”

Moreover, today’s plans to bring progress to Indigenous territories only perpetuate colonial discourses of civilization and discovery. Just as Spanish colonizers claimed to have discovered America and its native peoples, so too have European wind power companies celebrated their discovery of the strong winds that for millennia have been essential to the survival of fishing peoples on the Pacific Coast of Oaxaca. And so too have North American corporations and universities praised their discovery—in the Sierra Mixe of Oaxaca—of a miracle maize that has the ability to fertilize itself. 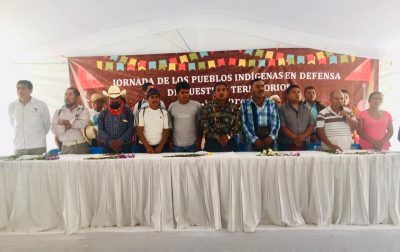 Faced with increasing threats, Indigenous communities are reinforcing traditions of collective work and celebration that for centuries have been the pillars of communal life in Oaxaca. They are also organizing to strengthen their mechanisms of self-governance and exercise their right to self-determination.

“We consider it urgent to defend our communal lands and strengthen our communal statutes, as well as to monitor our authorities so that they don’t consent to land use changes for mega-development projects,” they affirmed. “We will continue to build our autonomies and defend our territory.” Most importantly, participants in the day of action agreed that only through forging alliances will it be possible to defend our peoples, territories and Mother Earth for generations to come.