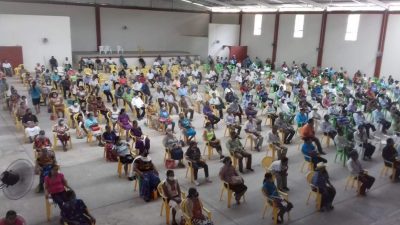 On July 5th, it was decided at a meeting in San Juan Guichicovi in ​​which more than 300 ejidatarios and Jose Sanchez, director of the Tehuantepec Railroad (FIT) participated,  that the remodeling works for the rehabilitation and modernization of the section of the Trans-Isthmus train in the Tehuantepec would continue to be suspended until there are consultations and attention to the demands of the residents.

The meeting was part of an agreement between these residents, representatives of the FIT and the Government of Oaxaca, after the works were stopped on June 18th by pressure from indigenous peoples in the area, who asked to have an assembly to inform the agrarian authorities and communities on the impacts that the works of the Interoceanic Corridor will have.

During the meeting, the ejidatarios demanded information about the impacts of the train, demanded consultation and attention to their historical priorities such as a hospital, solutions to agrarian conflicts, high electricity costs and a university. If there is no attention to these demands, they will continue to impede the rehabilitation works of the trans-system train tracks, they affirmed.

“We are not going to allow the government to come to impose its projects. We have already told you that the people will not allow these works to begin. First they have to listen to us, tell us how this work is going to benefit us, and then the government has to pay the historical debt that it has with we indigenous people”, Pedro Albino Juan, President of the Ejido of San Juan Guichicovi, commented.

Faced with these claims, the FIT authorities proposed holding a series of assemblies in the communities that will take place between July 12th and August 9th, a suggestion that was accepted by the inhabitants and ejidatarios but with the clarity that these assemblies will not count as consultations.

On July 4th, the governor of Oaxca, Alejandro Murat, paid a visit to learn about the progress of the Interoceanic Corridor on the Isthmus of Tehuantepec, in which he stressed that the works of the Trans-Isthmus Train contemplate the inclusion of the citizens through the improvement of the urban and social environment in the area.