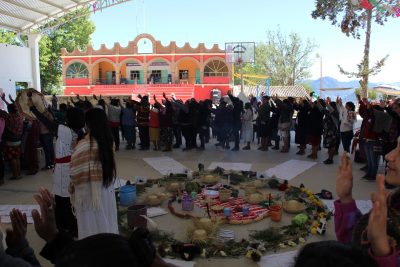 Women across Oaxaca united on March 8 to mark International Women’s Day.  In the community of San Cristóbal Amoltepec, indigenous women from rural Zapotec and Mixtec communities in the Central Valley, the Mixteca, and Coast of Oaxaca came together to create a dialogue among women who live in territories threatened by extractive projects.  The event began and ended with a ritual, honoring female activists killed for their efforts to defend their territory, water, and the environment and was accompanied by a mural which high school students from the region made to honor their community and mother tongue, Mixtec.

During the event, women of all ages reflected on the idea that women’s bodies are their territory: ones that face violence, physical and psychological, but also hold immense strength.  As women shared about their lived experiences, they reaffirmed the need in the defense of their communities to also support one another in protecting their personal territories, themselves. As a collective, they recognized and celebrated their contributions to their communities and the advances they are making to take on more public roles as local authorities, to have their voices be heard, and to defend their communities against extractive projects that exploit and threaten their land.

Throughout Mexico, hundreds of thousands of women mobilized in protests and marches. In unprecedented numbers, women came out to demonstrate their anger and frustration  at the government’s inability to curb the growing rate of femicides and gender-based violence and to demand action. The following day, March 9th thousands of women participated in a “A Day without Women,” a national strike where women stayed home from work and refrained from shopping or going out on the streets in a mass action to reflect what Mexico would truly be like without women.

‘A Day Without Us’: Mexican Women Strike to Protest Femicide