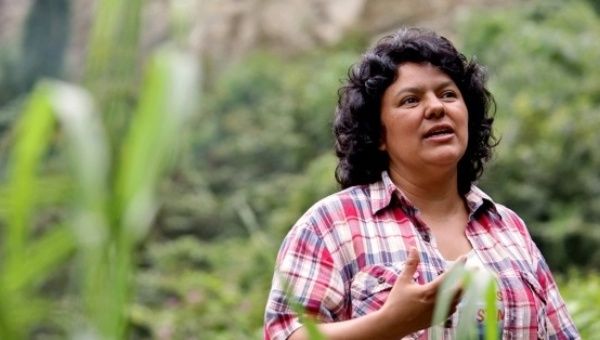 Honduran indigenous and environmental organizer Berta Cáceres has been assassinated on 3 March 2016 in her home. She was one of the leading organizers for indigenous land rights in Honduras. In 1993 she co-founded the National Council of Popular and Indigenous Organizations of Honduras (COPINH). For years the group faced a series of threats and repression.
In 2015 Berta Cáceres won the Goldman Environmental Prize, the world’s leading environmental award. In awarding the prize, the Goldman Prize committee said, “In a country with growing socioeconomic inequality and human rights violations, Berta Cáceres rallied the indigenous Lenca people of Honduras and waged a grassroots campaign that successfully pressured the world’s largest dam builder to pull out of the Agua Zarca Dam.”

It is with the most profound and sincere pain that we share information of the vile assassination of our comrade, mother, guide, sister, leader, and friend, Berta Cáceres, founder of COPINH.

Today we mourn her death, as well as the deaths of the other comrades who have died in defense of the Gualcarque River and the territory of the Lenca people.  Berta lived the life of a fighter, a warrior without fear who confronted the most perverse powers of the exploitative and inhumane capitalist system—this system that understands neither motives nor struggles, neither life itself nor respect for the existence of we the people who wish to live in peace and tranquility, with dignity and full humanity.

Berta Cáceres was recently awarded the Goldman prize for her defense of the environment in Honduras.  It is this defense that today they are trying to silence with Berta’s death.

COPINH has confronted assassinations, death threats, criminalization, persecution, stigmatization, and discrimination since its founding.  Although such threats against Berta and other members of the organization have always been denounced nationally and internationally, Honduran institutions have done everything possible to impede justice and deny the very existence of COPINH.  Despite the cautionary security measures assigned to Berta by the Inter-american Court of Human Rights, her assassination was not prevented.

We reject any form of exculpation by the Honduran government, its institutions, and its oppressive authorities; in fact, we directly blame them for the cruel assassination of our leader.

We know very well who murdered her.  We know it was DESA and the Hydroelectric project Agua Zarca, financed by the Dutch Development Bank (FMO), the Finnish Fund for Industrial Cooperation Ltd. FINNFUND, the Central American Bank for Economic Integration (BCIE), the German corporations Siemens and VoithHydro, the company CASTOR (Castillo Torres) Constructora Cerros de Comayagua, the Honduran bank FICOHSA, the corporate group of the Atala family, the government of the United States through the USAID program and the project “Mercado,” as well as SERNA, in complicity with the National Government of Honduras.  These are the authorities behind the physical disappearance of Berta.  Their hands are stained with indigenous blood and with the blood of the Lenca people.

From COPINH we call for national and international actions that contribute to stopping such acts of political aggression and the systematic violation of the rights of the Lenca people.  We call for actions that denounce the strategies used by corporations to control and privatize the commons and nature itself.  We summon the Honduran people to gather around this tragedy, to fight for our rights, and to express that we will no longer tolerate such events.

They tried to finish with Berta’s life, but she is more alive in each one of us today than ever before.

With the ancestral force of Iselaca, Lempira, Mota, and Etempica, we raise our voices full of life,
justice, dignity, liberty, and peace!

Statement and call to action from La Via Campesina