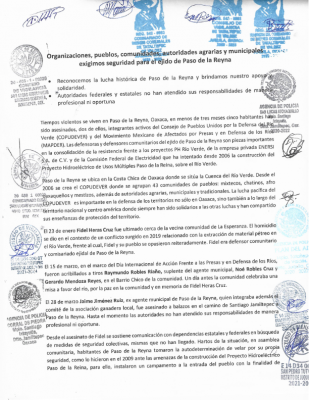 Today, on Earth Day, organizations and communities publish a declaration demanding security for the community of Paso de la Reyna, Oaxaca and showing their solidarity for this community currently under threat. “Paso de la Reyna, Oaxaca is experiencing a wave of violence, in three months five inhabitants have been assassinated, two of them members of the Council of People United in Defense of the Río Verde (COPUDEVER) and of the Mexican Movement of those Affected by Dams and in Defense of Rivers (MAPDER). The community based human rights defenders from Paso de la Reyna are important members in the resistance against the Hydroelectric Project Río Verde, being promoted by the company ENERSI and the Federal Electricity Commission (CFE) that have tried since 2006 to impose the construction of the Hydroelectric Project “Paso de la Reina” on the river “Río Verde” affirms the declaration.

The petition laments that state and federal authorities have not seen to their responsibilities, to ensure the security of the community or investigate these murders and bring justice, in a professional or timely manner. Recently the community assembly of inhabitants of Paso de la Reyna voted to collectively set up their own security measures, given the inaction of the government.  Back in 2009, they did the same in the face of threats to construct the Hydroelectric Project, Paso de la Reina. They have set up an encampment at the entrance to their town to guarantee the safety of their inhabitants. The organizations, towns, communities and municipal and agrarian authorities who sign this declaration “embrace and support this community agreement.”  Among the first to sign are community and agrarian authorities from San Lucas Atoyaquillo, Corral de Piedra, San Pedro Tututepec, Tataltepec de Valdéz, Plan del Aire, de los distritos Jamiltepec y Juquila, Oaxaca.

Please join us in supporting the community of Paso de la Reyna and signing the petition.  It will be open until Friday, April 23rd which marks three months since the assassination of Fidel Heras Cruz, president of Paso de la Reyna whose death still remains in impunity: