Remembering Brad Will in Mexico 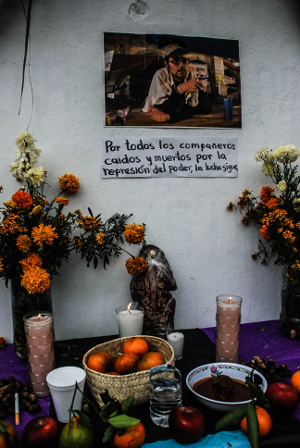 William Bradley Roland, aka Brad Will, an independent journalist from Indymedia New York went to the southern Mexican state of Oaxaca in 2006. Like many other alternative or independent media producers, Will sought to break the media siege that the mass media had created, which downplayed or reduced the number of people mobilized in the more than five month uprising that shook the state in 2006.  This uprising saw an actual number of more than two million people with over 3,000 barricades erected. Thus, on October 27, 2006, while conducting his work, a bullet from state-hired thugs, snatched his life.

“We will never forget compañero Brad because he is in our hearts and in our history, like the other 26 compañeros that were murdered by the state.” expressed Mrs. Carmen Martinez, who prepared for a march and rally that is organized annually by the residents and groups in the Calicanto barricade that remembers Brad Will and demands justice for him and the other 26 other protesters that were killed and who have yet to receive justice.

It all started when the former governor of Oaxaca, Ulises Ruiz, said he would not allow any march, protest, or social discontent to take place. Those methods are the only options for a people that are, according to the official statistics, the third poorest in Mexico. Thus, as a response to the first protest of his term, when teachers took the main plaza of Oaxaca City, Ruiz sent police to repress and evict them on the morning of June 14, 2006.