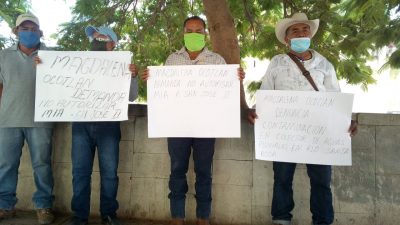 On July 27, the Oaxacan Collective in Defence of the Territories posted this statement that reports that the Compañía Minera Cuzcatlán, a subsidiary of Vancouver-based Fortuna Silver Mines Inc., has submitted an environmental impact assessment (MIA) for approval by the Ministry of the Environment and Natural Resources (SEMARNAT).

That MIA, which has not yet been approved by SEMARNAT, seeks a 10-year extension for the San José Mine situated near the Zapotec village of San José del Progreso in the state of Oaxaca in south-western Mexico.

This mine was first developed in 2009, shifted into production in September 2011, and now the company needs this permit to continue its operations beyond 2021.

The statement posted by the Oaxacan Collective further notes that Fortuna argues in the MIA it submitted to SEMARNAT that the proposed San José II mine, a 7,000-hectare expansion of the existing 700-hectare mine, is not a new project nor an extension of the existing mine, but rather a previously developed project.

Last month, concerns were raised for a second time that the mine had polluted local water sources, this time a rainwater catchment well in Magdalena Ocotlán.