On the morning of June 5th, World Environment Day, cheers of welcome greeted Bishop Pedro Vásquez Villalobos of Puerto Escondido, as he entered the village of Paso de la Reina with a procession of humble priests in his wake. What followed was a politically inclined and powerful mass to underpin the village’s continued struggle against a hydroelectric dam construction on the Rio Verde (Green River), mere hours from the south-western coast of Oaxaca, Mexico.

Approximately 500 residents inhabit Paso de la Reina, municipality of Santiago Jamiltepec Oaxaca, of which various organised members have been peacefully resisting the imposition of the mega-construction since 2009.

Currently the main strategy of the members of the Council of Peoples United for the Defense of the Rio Verde (COPUDEVER) consists of a simple blockade of the entrance to the village which prevents the entry of the Mexican government’s Federal Electricity Commission (CFE) and any further feasibility studies left to be carried out (Treat 2013).

In the years since its initiation, the struggle has received support from residents in regions surrounding the proposed site of construction. 600 people gathered in Paso’s main plaza on the morning of the mass, among them local community defenders as well as the civil organization EDUCA, to listen to the Bishops unmistakably disapproving discourse regarding the dam.

“I say to those who live here and are making an effort to protect this river and the land, feel our support … our spiritual presence and strength of will, because we are united with you, in saying NO to the construction of the dam at Paso de la Reina …” stated Bishop Villalobos.

In an interview with local journalist Eva Castellanos Mendoza, the Bishop expressed that the CFE had reached out to him, though unsuccessfully, in order to ask him to convince the resisting communities to give up. Bishop Villalobos affirmed that COPUDEVER and the inhabitants of Paso de la Reina are not working against ‘progress’, but instead are seeking alternatives to the types of construction that would harm their wellbeing and the life of the river’s environment.

The villagers want to continue their life “within this reality, with this river”, the Bishop stated.

The repercussions of the Paso de la Reina hydraulic dam project that would occur as a result of its construction on the Rio Verde would destroy not only a crucial part of the biodiversity of the river’s surroundings, but impact 43 other communities on the coast of Oaxaca along with it.

“The intention of the government’s federal electricity commission is to build 3 curtains on the Rio Verde. In 2006 the CFE announced that the curtain would be 195 meters high. The result was that people got scared; for us this doesn’t mean development, it means the end of the river. That is why the villages and municipalities are organizing themselves. Six municipalities and over 40 communities would be affected. That is why we are participating in all the meetings, workshops, marches, blockades… ”, stated Lucio Ramirez, community defender and COPUDEVER member. 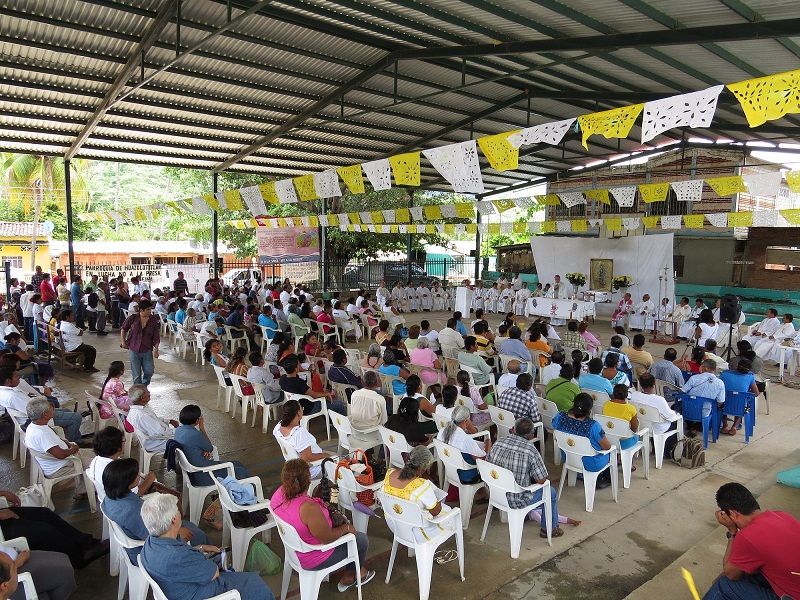 “This river is so important to us because it is a heritage that our fathers and forefathers have left us. We in turn as fathers cannot permit that through the CFE the government succeeds in realizing its project, because this would harm many people as well as animals and the natural environment.”

Along with other community defenders and environmentalists, Ramirez is concerned about the devastating impact on residents and the biodiversity of areas such as Lagunas de Chacahua, the National Park as well as impacts on local fishers and the possible upshot of migration.

Oaxaca’s Ombudsman’s Office have raised its concern on the possible violations of human rights of the inhabitants of 47 communities on the Oaxacan coast. In the case of the construction of the dam, they characterised the actions of the CFE as ‘harassment’ of the 42 communities that had decided to refuse their consent for the continuation of the planned construction. In the same session, members of the communities also managed to accuse the CFE of having concealed information on the true consequences the dam would have, including evictions and further risks of injury.

Chairman of the Ejidal Commissariat of Paso de la Reina Eloy Cruz expressed his wish for those present at the mass to share the stories and significance of their struggle with their communities.

“As sons and daughters we have the responsibility to take care of this land and the resources that god has given us, that god has lent us, for the days that we walk upon it and enjoy material life. There are people that think differently, and only see their material gain, but we know that money isn’t everything. As COPUDEVER, we think that while we have our land on which we can plant and from which we can feed ourselves, we can continue living… ”.

These words may very well be necessary to prepare for the challenges that await COPUDEVER, the municipalities and villages that would be affected by the megaproject.  On July 18th the CFE announced its plans and costs for the construction of the dam, and with it, the potential damnation of the Rio Verde and its defenders.