Mexico is suffering a crisis of violence and impunity, 141 human rights defenders have been murdered , 17 disappeared in four years. This total of murders, dating  from the beginning of the six-year term in December 2018 until November 2022, includes 19 women, 8 people of diversity, as well as 114 men. The states of Oaxaca with 34, Guerrero with 25, Chiapas with 14 and Chihuahua with 10 crimes related to defenders, account for more than half of the murders, executions and disappearances of human rights defenders. It is important to mention, the vast majority of murders have gone unpunished, and the vicious cycle of violence continues to accelerate. Entire families displaced, children orphaned and communities with a broken social fabric are some of the dramatic consequences behind the figures of this violence statistic. The campaign “Wings and Roots of Social Movements in Oaxaca” denounces the violence against defense processes.

Infographic 1, Defending rights as a high-risk activity in Oaxaca 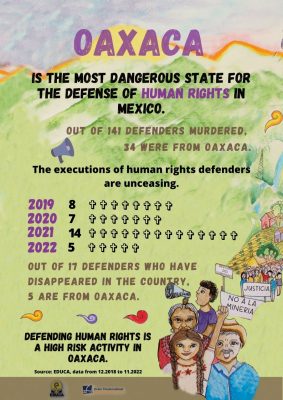 According to this first Infographic, emanating from an investigation conducted by EDUCA entitled “All their names, all their struggles”, we conclude, during the last four years (2018-2022), crimes committed against defenders in the state were a constant. Oaxaca consolidates as the entity in the whole country where the highest number of murders was committed. Of 141 crimes committed in Mexico, 34 correspond to the state of Oaxaca.

With 34 crimes, Oaxaca is the most dangerous state for the work of human rights defenders, followed by Guerrero with 25, Chiapas with 14 and Chihuahua with 10 defenders murdered the past four years.

In Oaxaca, the most lethal year was 2021, with 14 murders of human rights defenders. This figure strikes out due to a very high incidence of the pandemic, and the country was maintaining the rules of confinement for public health reasons. The other striking fact is, of the 17 missing human rights defenders, five are from Oaxaca, that is to say, almost a third.

Infographic 2; Local authorities, the main perpetrators of violence against defenders 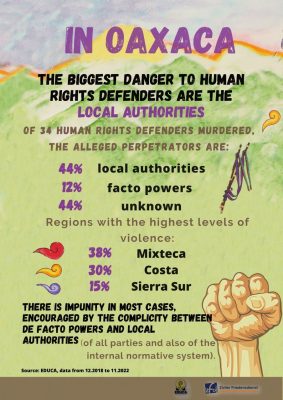 Whether from political parties and from the communities, local authorities represent the greatest danger to the work of human rights defenders in Oaxaca. EDUCA’s research identifies 44% of the total number of cases of crimes committed against defenders involved local authorities directly or indirectly. In 12 %, communal powers were involved; this group includes regional rulers, organized crime, companies, or trade union groups. In the remaining 44% of the cases, the origin of aggression is unknown.

Out of 34 human rights defenders murdered in Oaxaca, the majority of the cases occurred in the Mixteca region (38 %); 30 % in the Sierra Sur, and 15 % in the Costa. These three regions are considered the most violent in the state. It is important to mention most cases remain unpunished due to the complicity between the de facto powers and the legally constituted authorities.

Faced with this scenario, policies for the protection of human rights defenders in the state of Oaxaca and the country are urgently needed. The cases of assassinations and disappearances must no longer remain impunity. With the beginning of a new six-year term in Oaxaca, we will expand our monitoring efforts and will also work for non-violent solutions to social and political conflicts. 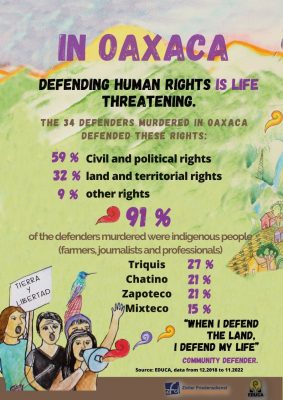 The United Nations (UN) established December 9 as the International Day of Human Rights Defenders. In a joint statement, the UN and the IACHR recognize “the increase in a stigmatizing discourse seeking to delegitimize or silence the work of human rights defenders in various countries. In some cases, it is of concern how these speeches come from the highest authorities of the States”.

Due to the importance of this day for the work of human rights defenders and with the purpose of generating more knowledge and information about the work of human rights defenders and the painful costs they have to bear, we present this third infographic based on EDUCA’s registry and database. Of the 34 people murdered in the last four years in Oaxaca, 59% were dedicated to the defense of civil and political rights; 34% to the defense of territories, and 9% to the defense of other rights. Also, 9 out of 10 defenders murdered, self-identified as indigenous, from the following peoples: Triqui, Chatino, Zapotec and Mixtec.

In the context of the International Day of Human Rights, EDUCA recognizes the work, effort and sacrifice of all these defenders who were murdered, and whose commitment in defense of territory, culture and the right to life has remained in the collective imagination of society. 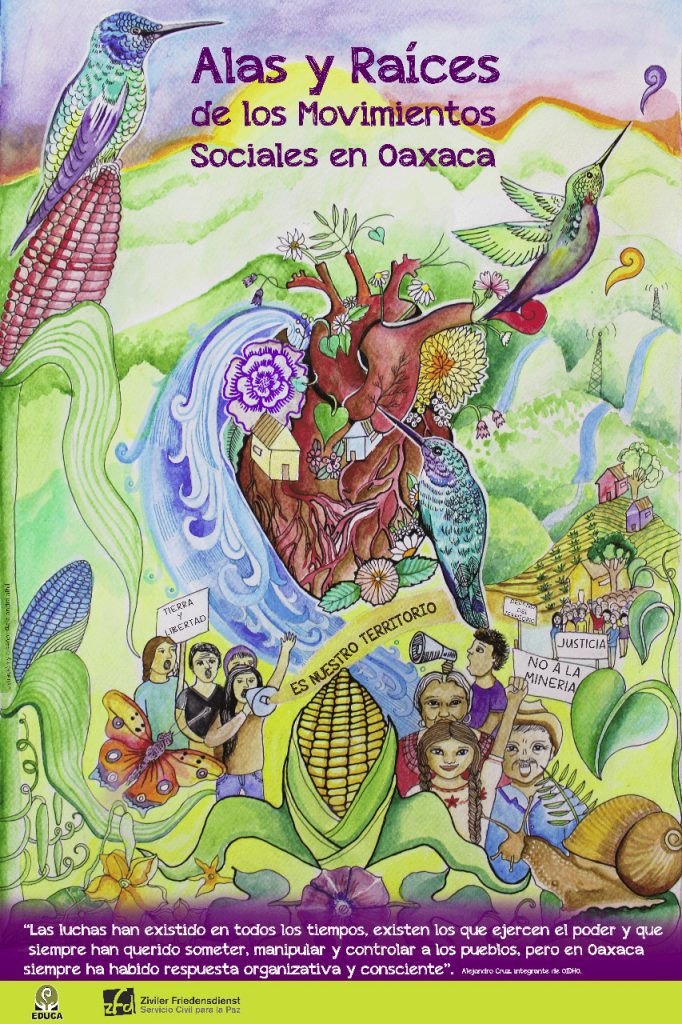