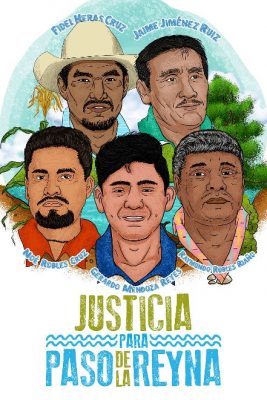 On July 27th, the Network of Community Defenders of the Peoples of Oaxaca, REDECOM, and the Council of Peoples United for the Defense of the Rio Verde, COPUDEVER, published the statement “Six months demanding Justice in Paso de la Reyna” in which they announced that their demand for justice for their five murdered fellow defenders (Fidel, Jaime, Noe, Gerardo, Raymundo) almost six months after the events, remains unanswered.

“The Mixtec, Chatinas and Afro-Oaxacan communities that have developed their lives around the Verde River have been in resistance for the defense of their territories for more than fourteen years. During this time they have faced various aggressions, for which they have had to organize from the community in which they develop their community ways of life. During these years, Paso de la Reyna and the other communities that are members of the Council of Peoples for the Defense of the Rio Verde, COPUDEVER, have said: NO to the hydroelectric project and have managed to circumvent the actions that the State has implemented to install two dams, which in addition to depriving them of the water and the territory that has belonged to their grandmothers and their grandparents, would alter not only the natural tributary of the river, but also the ways in which the riverside communities relate to their environment”, they said in their statement.

“Without an institutional response that gives them certainty, the population has had to organize internally and has formed a guard that for a couple of months, has allowed them to breathe with a little calm”, they stated. This is due to the fact that the different governmental bodies responsible for carrying out the investigations “have not shown progress, despite the fact that the need to grant precautionary measures has already been recognized, the measures are not being complied with, therefore, the defenders are helpless and defenseless due to the lack of compliance by the Mexican State to safeguard the rights of human rights defenders, as well as to ensure their safety and integrity when carrying out their work.”

Six months after the murders, “the river no longer sings its liquid melody happily, fear continues, hidden along the path, a silent requiem of fireflies and crickets, sadness nests among the taciturn moss of the stones, the bridge that leads to the community shouts between its letters: No to the Paso de la Reyna hydroelectric project, in permanent vigil. However, its presence is still alive, and now it lives in the frond of the trees, in the purple of the bougainvillea, in the serene voice of the wind, a flock of invisible birds that draws among the marine reflections of its waters, in the spirits of the river that nest their faith in the memory of fish the perennial memory of those who have given their lives to defend it”, they concluded.