Of the 41 active mining projects in the southern Mexican state of Oaxaca, not one passed through a consultation process with local Indigenous communities, as required by Convention 169 of the International Labor Organization, an international treaty of which Mexico is a signatory. 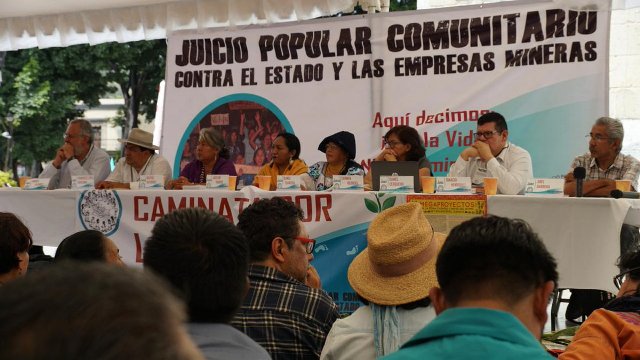 The failure to consult with native peoples is just one of 22 violations of Indigenous and human rights identified by expert jurors at the first “People’s Trial against the State and Mining Companies,” which took place in Oaxaca City from October 11 – 12.

Mexican authorities, along with mining companies from Canada, the United States, Australia, Peru, and Mexico, were also charged with environmental contamination, the fracturing of community institutions, and the criminalization and murder of human rights defenders.

The political tribunal, organized by affected communities in conjunction with local and international organizations including EDUCA A.C., sought to create a space not only for denunciation but also for the autonomous exercise of justice, given that legal institutions have failed to hold most corporations accountable.

Authorities and members of the Chatino, Chontal, Cuicateco, Ikoots, Mixe, Mixteco, Zapoteco and mestizo peoples presented evidence of the way mining projects have contaminated their sources of water, destroyed planting areas, weakened traditional forms of organization such as community assemblies, and caused the deaths and disappearances of human rights defenders. These harms correspond to the violation of Indigenous Peoples’ rights to territory and preferential access to natural resources, their right to self-development and cultural identity, and the right to technically and culturally appropriate information.

One of the strongest testimonies regarding the rupture of community institutions came from residents of San José del Progreso, where the Cuzcatlán mining company, a subsidiary of Canada’s Fortuna Silver Mines, has been exploiting gold and silver at the “San José” mine since 2011.

“They’ve damaged the plots we planted near the company, they’ve imprisoned us, and Bernardo Vázquez Sánchez and Bernardo Méndez were murdered. We demand the cancellation of the Cuzcatlán mining company and of all such companies in the state of Oaxaca, and we demand punishment for those guilty of the murders,” declared Ignacio Francisco Vázquez Sánchez, president of the Coalition of United Peoples of the Ocotlán Valley (CPUVO).

Residents of the municipality of Magdalena Ocotlán, for their part, denounced the recent overflow of the Fortuna Silver Mines dam, which polluted the Coyote River. “People are alarmed because the Coyote River was painted white. Just 10 meters from the river is the well that supplies water to my town, my people; and the municipal authority has already warned residents not to consume water from the well; but the miners say they don’t pollute,” said a representative of that community. 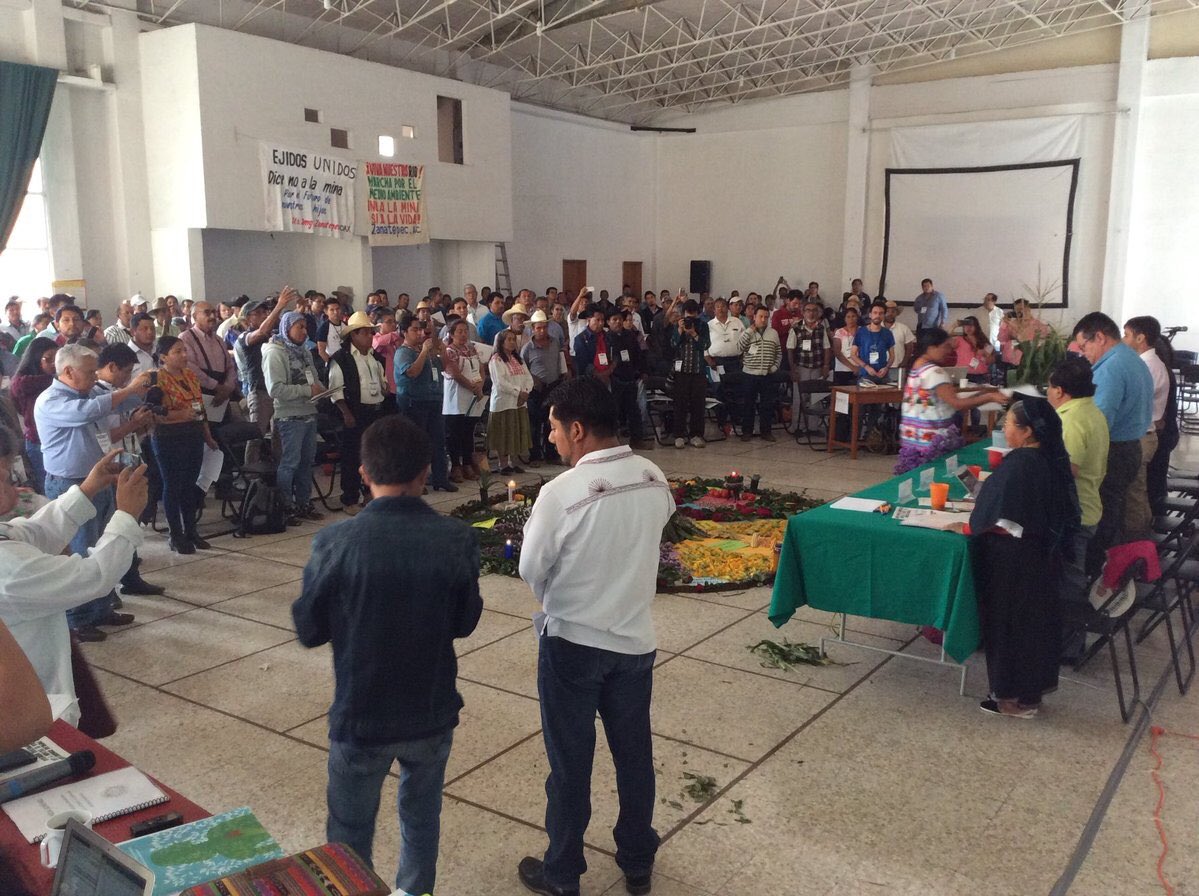 A commission formally delivers communities’ general demands to each judge at the People’s Trial against the State and Mining Companies in Oaxaca. Photo: People’s Trial.

The cases were presented before a jury made up of Blanca Chancosa, Vice President of Ecuador’s Ecuarunari people; Jakeline Romero Epiayu, member of the organization Wayuu Women’s Force and recipient of Colombia’s National Human Rights Award; and Daniel Cerqueira, Brazilian lawyer and expert on Indigenous Rights at the Due Process Law Foundation (DPLF); Ignacio Henriquez, Master in Public Administration who has collaborated with Oxfam in El Salvador; Miguel Álvarez, president of SERAPAZ and recipient of Mexico’s National Human Rights Award; Abel Barrera, director of the Tlachinollan Mountain Human Rights Center of Mexico; Beatriz Gutiérrez, community defender of the Ikoots People of San Mateo del Mar, Oaxaca; Carmen Herrera García, of the Mexican organization Lawyers for Justice and Human Rights; and Francisco López Bárcenas, Mixtec lawyer and expert on Indigenous rights.

The final verdict of the People’s Court, presented in the Zócalo of Oaxaca City on Indigenous People’s Day, demanded the cancellation of current mining concessions, as these were granted in violation of the rights of Indigenous and farming communities. The jurors called for the repeal of Mexico’s current mining law and a moratorium on further concessions pending the creation of a new legal framework that respects Indigenous self-determination and territorial autonomy.

The jury’s verdict also placed emphasis on the protection of land defenders, calling for an end to the criminalization of social protest and justice for those who have been disappeared and murdered while defending their communities from extractive industries.

Finally, the jury called on the Mexican Senate to ratify the Regional Agreement on Access to Information, Public Participation and Justice in Environmental Matters in Latin America and the Caribbean (Escazú Agreement), as well as to comply with recommendations made by the United Nations Special Rapporteurs on the Rights of Indigenous Peoples and the situation of Human Rights Defenders.

The verdict will be delivered to municipal, state, national and international human rights authorities and is part of a growing effort to prohibit mining and protect Indigenous sovereignty in the state of Oaxaca.

Waste overflows at Canadian mine in Oaxaca, threatening dozens of communities.

Communities, Organizations and Collectives of Oaxaca Form the Assembly of Central Valleys Against Mining.

Not Gold, Nor Silver…Mining is a Killer: Campaign Against Mining in Defense of Territory.