Oaxaca: In response to 4 years of impunity, hunger strikes and protests taken to resist murders of Bety Cariño and Jyri Jaakkola 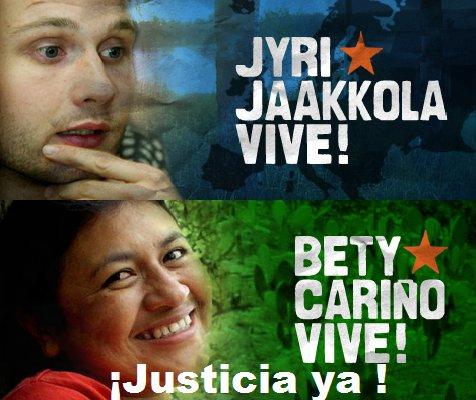 On 27 April, four years passed since the murder of Bety Cariño and Jyri Jaakkola when they were participating in a humanitarian-aid caravan destined for San Juan Copala.  Members of the European Parliament and relatives affirmed that the cases could have been resolved within two months, but that the authorities have not demonstrated the necessary political will to do so.

Barbara Lochbihler, president of the Subcommission on Human Rights from the European Parliament, commented that “we have been discussing the situation of human-rights defenders and social activists in Mexico for nearly two months.  And year by year we see that the situation continues to worsen.”  Relatives denounced that, despite the fact that 13 people have been identified as the presumed murderers, the federal and state governments refuse to release arrest-orders against them.  For her part, Karla Michel Salas, president of the National Association of Democratic Lawyers, stressed that “we know their names and that some of them even are public officials, but the arrest-orders are refused” using the argument that the government cannot itself enter the region of San Juan Copala.