Mexico is one of the most dangerous countries for HRD, and the situation “is worsening”: UN Special Rapporteur Forst 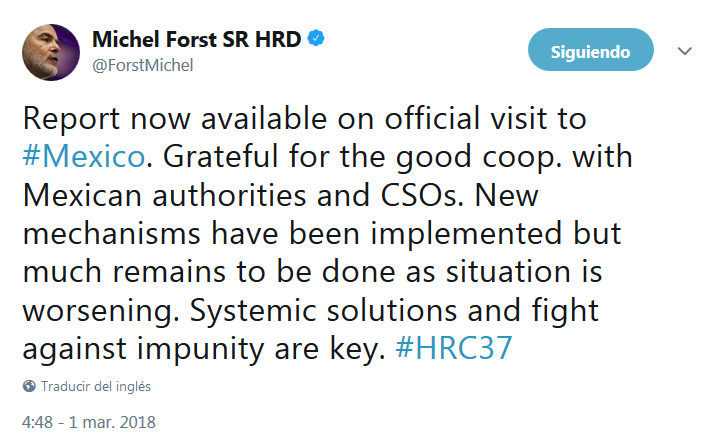 In the State of Oaxaca, he met with survivors of the violence that took place during large-scale teachers’ protests in June 2016. “Both those survivors and affiliated human rights defenders can only be considered to be protected when justice has been served, the perpetrators held accountable and the jailed protesters released”, remarks the Special Rapporteur in his report.

He also insists about sistematic human rights violation against the press: “Journalists covering protests also face a pattern of violence, harassment and legal action. For instance, in August 2016, journalist Manuel Morres was detained for 24 hours while reporting on demonstrations in Chiapas and two photojournalists covering a traffic incident in Oaxaca were arrested and allegedly tortured” (page 7). On his twitter account, Forst resumed his concerns: “Grateful for the good coop. with Mexican authorities and CSOs. New mechanisms have been implemented but much remains to be done as situation is worsening. Systemic solutions and fight against impunity are key”.

Download: Report of the Special Rapporteur on the situation of human rights defenders on his mission to Mexico (pdf, 21 pag).

Victims of Nochixtlán: a cry for justice