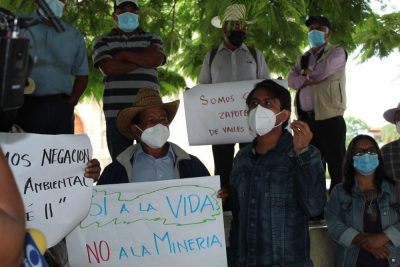 The Mexican Secretariat of the Environment and Natural Resources (Semarnat) has denied an environmental permit requested by Compañía Minera Cuzcatlán, a subsidiary of the Vancouver-based Fortuna Silver Mines for its proposed San José II project.

Mongabay has previously reported: “According to the last MIA that the company delivered in September 2020, they intend to continue with their gold and silver extraction activities in the municipality of San José del Progreso until 2029.”

The environmental permit was reportedly for a 7,000-hectare expansion of the existing 700-hectare mine.

But in its rejection of this permit, Semarnat stated that the company had failed to comply with the provisions of the original permit issued in 2009, by building 75 irregular works without authorization.

La Coperacha reports: “The No to Mining Front, composed of 12 communities in the Central Valleys, [has now] reiterated its demand for the total cancellation of the mining project, because, it recalled, for 10 years the Canadian mining company has systematically violated the human right to a healthy environment.”

On March 11, Peace Brigades International and Amnesty International co-hosted this webinar that featured Neftali Reyes of Educa Oaxaca and representatives from Magdalena Ocotlán discussing the impacts of this mine.

This Educa Oaxaca report on the webinar highlights: “The representatives of the community located just a few meters from the San José mining project, owned by the FSM company, reiterated that ‘the mining company is affecting us a lot’ with water pollution, mine waste, constant noise and the shortage of water.”

For more on this, please see the Educa Oaxaca website here and Oaxacan Collective in Defence of Territories here.