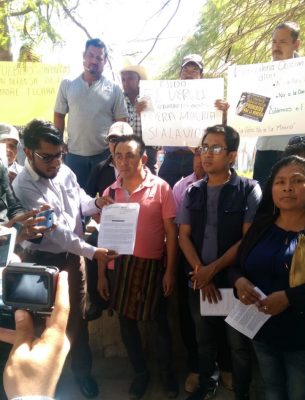 Mining interests in Oaxaca are finding that Indigenous communities are not giving up their land without a fight.

On February 2, local authorities from Capulálpam de Méndez, in the Sierra Juarez region of Oaxaca held a press conference to celebrate the cancelation of mining concessions in their territory.  The decision was part of a drawn out legal battle that started in 2015, when the town sought federal legal protection to cancel mining concessions that were given to the Canadian company Endeavour Silver, among others, without the community’s knowledge. This practice violates Convention 169 of the International Labor Organization which requires the consent of Indigenous peoples regarding projects that may affect their communities. The courts agreed, and ruled in favor of Capulápam recognizing their ownership and possession of their ancestral lands dating back to pre-Columbian times.

Simultaneously, in the Central Valley of Oaxaca, communities surrounding the San José mine located in San José del Progreso are organizing to stop the mine’s expansion and extension. Cuzcatlán Mining Company—subsidiary of the Canadian multinational Fortuna Silver Mines, is hoping to extend the mine for another 10 years.  A key step in this process is to get government approval of an environmental impact report (MIA). However, due to months of community organizing, the approval was denied pointing out 81 irregularities in the mine’s construction. The mine still continues in operation, however this win for the communities opposing it energizes their movement and desire to continue protecting their territory against foreign interests.

Visit our microsite (spanish and english): Creativity & Resistance to the threat of mining