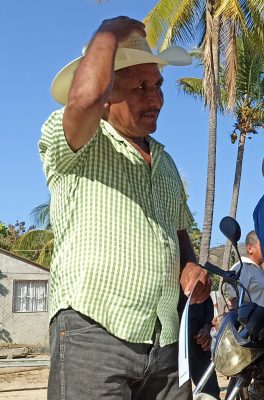 Filogonio Martínez Merino was  commissioner of the community land of Paso de la Reyna from 2008-2011 and for 15 years he defended the Río Verde against the Paso de la Reina hydroelectric project and the Río Verde project.  In the year of 2021 Filogonio held the office of the local political authority, when 5 defenders of the Council of Peoples United for the Defense of the Río Verde (Copudever) were murdered: Fidel Heras Cruz, Noé Robles Cruz, Raymundo Robles Riaño, Gerardo Mendoza Reyes and Jaime Jiménez Ruiz. Crimes committed in early 2021 remaining in total impunity to this day.

Last year Filogonio Martínez Merino requested, in his position as an authority and by mandate of the community assembly, precautionary measures for the community of Paso de la Reyna from the Federal Protection Mechanism for Human Rights Defenders and Journalists. Until today these measures remain in force.

Therefore, we demand the Government of the State of Oaxaca to intervene to follow up on the clarification of the facts. We call the State Attorney General’s Office to initiate the corresponding investigation. We ask the Human Rights Ombudsman of the People of Oaxaca to provide precautionary measures to the community of Paso de la Reyna and the family of the defender.

“Rivers for Life, Not for Death”.