Twelve days after the murder of Indigenous environmental activist Samir Flores Soberanes, Mexican authorities have neither determined a motive for the crime nor detained any suspects. 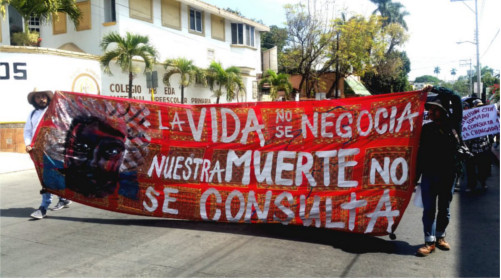 Flores, an Indigenous Náhautl radio producer and member of the People’s Front in Defense of the Land and Water for the states of Morelos, Puebla and Tlaxcala (FPDTA), died on 20 February 2019, after being shot twice in the head by unknown assailants outside his home in the town of Amilcingo in Morelos state.

In a press conference last Thursday, the Morelos State Prosecutor, Uriel Carmona, said investigators were pursuing six lines of inquiry, including links to organized crime as well as retaliation for Flores’s opposition to a thermal-electric plant and gas pipeline. Carmona said it was up to Flores’s family and neighbours “to make the points, to give us the information they have in order to shape this hypothesis.”

Last Tuesday, the federal delegate for Morelos, Hugo Eric Flores, said it was also necessary to investigate the leadership of the FPDTA “from beginning to end, just as I am saying that I should be investigated totally.”

Since Flores’s murder, the FPDTA has maintained that Flores had no enemies other than the promoters of the plant and pipeline, which form part of the “Integral Project for Morelos.” Last weekend, the megaproject was approved in a controversial referendum that was boycotted by residents of Amilcingo and other affected towns.

On Monday, February 25, Mexico’s president, Andrés Manuel López Obrador, announced that 55,715 citizens of Morelos, Puebla and Tlaxcala states had participated in the vote, with 59.5% of them endorsing the operation of the energy project. López Obrador, commonly known as AMLO, called the referendum “a good democratic exercise,” marred only by the “provocations” of opponents, who prevented the installation of eighteen voting booths.

Opponents say the megaproject is unviable because it would contaminate the environment and traverse a volcanic risk zone. In a statement, the FPDTA called the referendum “rigged,” noting that it was “the government, which had an interest in the ‘yes’ vote, that organized the consultation and monitored it, as well as counted and issued the results, without autonomous oversight.”

So far, seven Indigenous communities have filed legal injunctions against the referendum, which they say violated their right to free, prior and informed consent as established in international treaties. In an interview with Mexican journalist Carmen Aristegui, José Ramón Cossio, a retired Justice of Mexico’s Supreme Court, said the referendum was not a valid substitute for an Indigenous consultation, which is prescribed by the Mexican constitution for districts with this type of population.

In Morelos, where only 3.1% of registered voters participated in the referendum, opponents criticized a lack of voting stations in affected towns and an excess of them in municipalities far outside of the megaproject’s footprint. 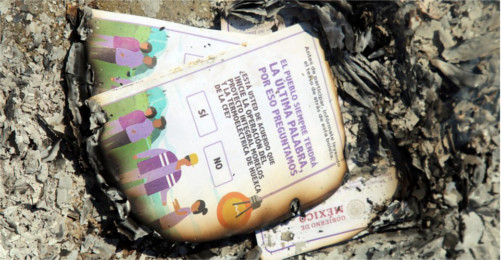 Supporters of the president, such as Jesús García from the populous city of Cuautla, characterized the opponents as “very bad,” adding that “we all know what the old regime was like, and these are the people who are against our president.” Lucio Herrera, a bread baker, said he approved of the power project because it would bring progress to Morelos – the only state in Mexico that does not generate its own electricity.

The Integral Project for Morelos was originally proposed in 2011, and has recently been promoted by AMLO as a way to improve the region’s energy independence. While the project belongs to Mexico’s Federal Electricity Commission, concessions for both its construction and operation were awarded to the Spanish companies Enagás and Elecnor and the Italian company Bonatti. The project is nearly complete, except for 140 kilometers of the pipeline whose construction has been impeded by a “Zapatista” protest camp in Apatlaco, Morelos.

Since taking office in December of 2018, AMLO has held referendums on several megaprojects, including a new airport in Mexico City and railways in southern Mexico. While the current administration has championed the referendums as a sign of “authentic democracy,” critics say the votes have no validity under current law, and serve only to justify the president’s favored plans.

Samir Flores is the fourteenth human rights activist killed in Mexico since AMLO took office in December 2018. Last week, civil society organizations pointed to an “alarming” up-tick in violence against environmental and human rights defenders as well as journalists, and reiterated their call for legal measures to protect this vulnerable population.