Communities, Organizations and Collectives of Oaxaca Form the Assembly of Central Valleys Against Mining 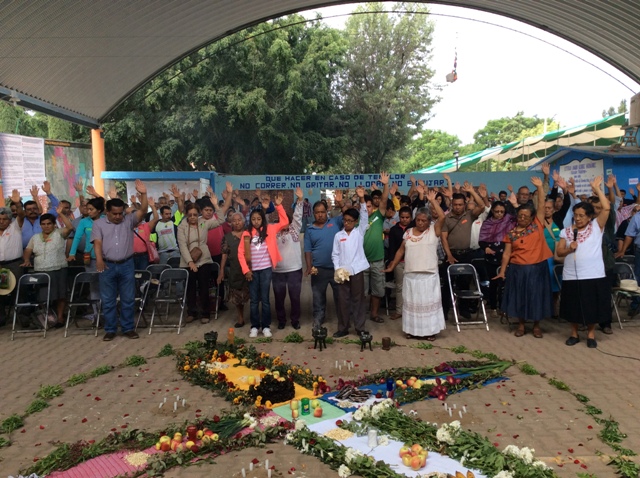 This pronouncement is the result of the gathering against mining in the Central Valleys of Oaxaca that took place in San Antonino Castillo Velasco, Oaxaca, on July 22nd, 2018. There, the participating communities, organizations and collectives made the decision to form an Assembly of [Oaxacan] Central Valleys Against Mining as a force to combat mining interests and projects in their territories. The original in Spanish was published by El Colectivo Oaxaqueño en Defensa de los Territorios and can be found here. Translation by Voices in Movement.

Thirty Indigenous and campesino communities that make up the Valleys of Tlacolula, Ocotlán, Ejutla, Zimatlán and Miahuatlán, along with 25 organizations, gathered in San Antonino Castillo Velasco, in the mark of the Statewide Day of Rebellion against Mining. We have decided to categorically reject whatever politics or project that harms community life, our social ties, the environment, our normative systems and our territories.

We denounce that for more than ten years our territories have been concessioned to different mining companies without our consent. At the moment, 90,000 hectares of the Central Valleys of Oaxaca are in danger, principally due to mining exploitation by the companies Fortuna Silver Mines and Gold Resource Corp.

These companies have increased Oaxaca to the eighth most exploited state in the republic of gold and silver. However, for our communities, the operation of mining has translated into violence, assassinations, physical aggression, irreversible damages to our environment, the breaking of social ties, divisions and confrontations.

For more than ten years we have denounced to Federal and State agencies the excessive violence with which these companies operate in our territories. However, we have not received any response. Thus, in the exercise of our free determination and autonomy, as Zapoteco communities of the Central Valleys, we declare that in our territories, “any activity whatsoever of mining prospection, exploration and exploitation is prohibited.”

As the peoples and communities of the Central Valleys, we have chosen life, peace and community development from within our own cosmovisions and with a profound respect of our Mother Earth. We state that mining does not represent an option of development for our communities and peoples.

Before the negligence and illicit deals of authorities and the opacity and violence of mining companies, we have made the decision to constitute ourselves into an Assembly of Central Valleys Against Mining, for which we declare a maximum alert before the imposition of diverse concessions and mining projects in our territories. In this sense, we make the following agreements:

1. We declare our commitment to continue defending Mother Earth, caring for and defending water that gives us life, as well as defending all of the natural resources present in our territories.

2. Our ejidos and communities are territories where mining is prohibited. This prohibition includes any activity that has the objective of modifying or extracting the natural resources in our territory.

3. We will not sign nor authorize any type of permission, agreement, contract, document or legal instrument, that seeks to extract our natural resources.

4. We will not authorize the change of land use to carry out any mining activities in the municipal territories.

5. We recognize ourselves as part of the Zapoteco people, for which we assume the commitment to defend our territories from within our assemblies, in an organized and peaceful manner using all legal channels.

6. We reject the Program of Regularization and Register of Agrarian Juridical Acts (RRAJA-FANAR) that puts our social property at risk.

7. We announce the Popular Community Trial against State and the Mining Interests in Oaxaca with the objective to confront the extractive model. Furthermore, to visibilize and denounce at the national and international levels the violation of the rights of the Indigenous, rural and campesino peoples and communities in Oaxaca caused by the imposition of concessions and mining projects. This trial will be carried out October 11-12 of 2018 in the city of Oaxaca.

To the federal and state government, to the elected authorities of the executive and legislative power and to the municipal authorities, we plant the following demands:

1. The immediate cancellation of the Industrial Mining Corridor that is sought to be imposed in the Central Valleys. We particularly demand the cancellation of the mining projects “San José”, “Trinidad Norte”, and “El Águila”, operated by the companies, Fortuna Silver Mines and Gold Resource Corp. They operate in the municipalities of San José del Progreso and San Pedro Totolapan.

2. We demand justice for Bernardo Méndez and Bernardo Vásquez assassinated in 2012 for their work in defense of the territories in San José del Progreso.

3. Cancellation of the mining concessions that have been imposed in the Valleys of Ocotlán, Zimatlán, Tlacolula, Ejutla and Miahuatlán. We reiterate that they do not have our endorsement nor consent to carry out work in our territories.

4. We demand the end to the criminalization and aggressions against the defenders, movements and media working in defense of territory.

5. We express our condemnation of the violent acts, the recent massacres and the assassinations that have occurred in the regions of the Southern Sierra, Northern Sierra, Istmo and Central Valleys.

6. We declare ourselves against assassinations as a means to resolve internal conflicts over land, principally between San Lucas Ixcotepec and Santa María Ecatepec. Excessive violence is not an isolated situation, as has been suggested by the governor of the state of Oaxaca. These actions respond to particular interests, for which the state has not given sufficient attention. We demand that the state guarantees peace between communities.

7. We express our solidarity with the communities and movements that have been affected by the escalation of violence in the state, principally with the compañeras and compañeros of CODEDI, who have suffered assassinations and detentions in recent months. Furthermore, the compañeras and compañeros of San Miguel Cajones where three people were disappeared on December 27th, 2017, in the mark of the imposition of a mining project and an intercommunity agrarian conflict. For this, we demand justice and punishment to those responsible for the acts.

8. We hold the authorities responsible for whatever aggression, criminalization or threat that arises from our defense of our territory. We demand the guarantee of our right to information, free expression and protest, rights recognized in the constitution.

Yes to life, no to mining!
Not Gold, Nor Silver, Mining is a Killer!
From the Mountains to the Desert, no Tunnels or Open-Pit Mining!
We do not Want a Golden Ring you See, We Want a Tlayuda to Eat!

Assembly of the Central Valleys Against Mining

Given in the auditorium of the school “Esteban Vásquez”, San Antonino Castillo Velasco, Oaxaca, México.