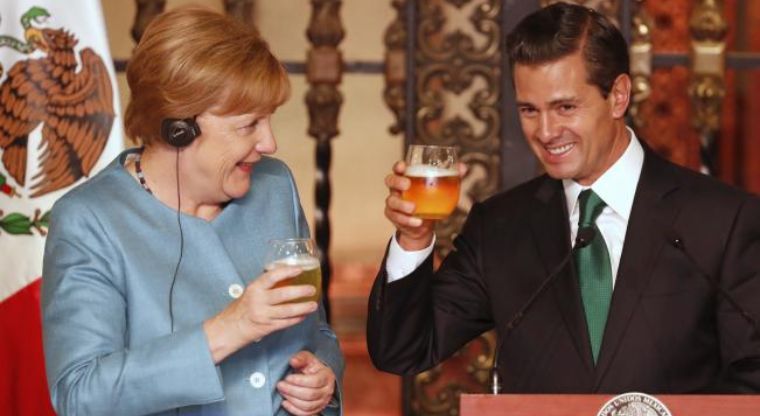 In a joint message released on November 1, the Foreign Affairs Ministries of Mexico and France declared that critical updates to the EU-Mexico Free Trade Agreement will soon be finalized. Authorities insist that the modernization of the 17-year-old pact, which is part of the Global Agreement, will enable greater access to Mexican products in the European Union as well as increased imports of European products to Mexico.

Still, market experts point to the toll that free trade agreements have already taken on Mexico since 2000. Rather than diversifying its export markets, Mexico remains heavily dependent on the U.S. market: 80 percent of its exports still go to the United States. Moreover, the trade deficit with the EU is widening: between 2002 and 2015 it grew from €8.6 billion to €14 billion.

Even more troubling is that the EU refuses to apply the Global Agreement’s human rights clause enabling government consultations and trade sanctions in the case of serious violations of international norms, despite a dramatic deterioration of Mexico’s human rights situation over the last decade. When German Chancellor Angela Merkel met privately with Enrique Peña Nieto last June, she did little more than chide the Mexican President for the tens of thousands of homicides, extrajudicial executions, and disappearances of women, students, journalists and Indigenous and farming peoples, before toasting to Mexico’s progress and indicating that German companies “feel right at home” in Mexico.

European and Mexican civil society organizations warn that the renewed FTA only heralds further impunity. The following is a summary of some of the key issues at stake in negotiations, as laid out in a report published by Bread for the World, Misereor, and the Center for Research and Documentation Chile-Latin America e.V.:

The negotiating directives set out a very broad agenda including issues such as investment, services, government procurement, intellectual property rights, energy and raw materials. One of the most sensitive issues of the EU-Mexico negotiations relates to the EU’s objective to include investment protection and the highly contested investor-to-state dispute settlement procedures in the new trade accord. The Global Agreement currently in force does not have such provisions. The EU advocates specific rules granting transnational corporations the exclusive right to seek compensation before international tribunals in the event of regulatory changes deemed to violate investors’ ‘legitimate expectation’ of a stable business environment.

The EU wants to prop up the transnational seed and pesticide business by facilitating the use of chemicals and high-yielding varieties in agriculture, including hybrids and GMOs. This would benefit biotech companies such as Germany’s Bayer, which is currently negotiating the take-over of global seed giant Monsanto. In Mexico, Bayer’s local subsidiary presently sells two insecticides suspected of causing cancer and endangering bees: Semevin 350 and Poncho Super. The two are prohibited in the EU. Bayer’s Finale Ultra herbicide, also sold in Mexico, may lead to malformations of fetuses.

Gold rush for the energy sector

Since 2014, when Mexico opened up the oil and electricity industry to foreign investors, transnational corporations have embarked on a new gold rush. For the first time in almost 80 years, private companies may directly invest in the exploration and production of oil and gas. The ‘modernized’ trade agreement aims at facilitating European investment in the Mexican energy sector. It will almost irreversibly ‘lock in’ the market access liberalization afforded under the 2014 Mexican energy reform. In addition, the EU seeks provisions impeding price controls on electricity and fuels, effectively restricting the policy space to pursue pro-poor energy regulations.

In June, 54 civil society organizations from across Europe and Mexico called for a halt of ongoing negotiations until the European Commission and the Mexican government agree to publish drafts of negotiations, ensure participation of civil society groups in decision-making processes, and re-think the foundation of trade relations between EU and Mexico with an emphasis on human rights and sustainability, amongst other demands.

Human Rights on the Sidelines: The renegotiation of the EU trade agreement with Mexico (FDCL)