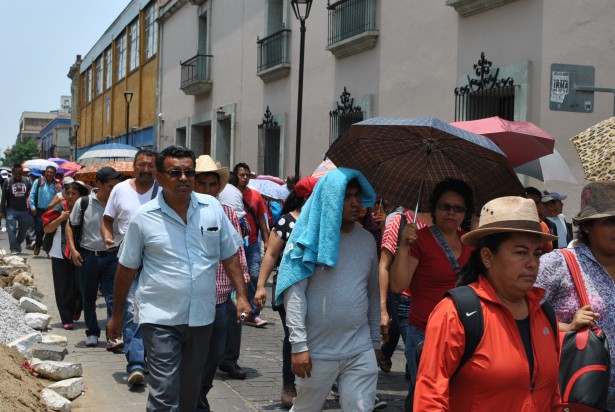 On  June 19, the southern Mexican state of Oaxaca was the scene of a senseless massacre. The bloody battle took place in the rural town of Nochixtlan and resulted in the death of at least nine civilians. “Right now, the federal police are withdrawing, going back to their vehicles,”said a witness of the attack as he filmed the horrific scene. Bullets are heard smashing against metal traffic barriers on the roadside as the camera image shakes. Taking heavy breaths he calmly continued, “And as they retreat, they are shooting at us with firearms.”

A week earlier, police crackdowns had begun in various regions of Oaxaca state. These acts of violence are occurring in light of current protests in Oaxaca, where — since May 15— the teachers’ movement has set up a peaceful plantón, or encampment, in the city center, and dozens of roadblocks across the state, including Nochixtlan. The teachers demanded a dialogue with the local and federal government about a recently approved education overhaul and the implementation of its neoliberal policies in Oaxaca.

The conflict first escalated when two of Oaxaca’s major union leaders were accused of money laundering, arbitrarily detained and taken to maximum security prisons on June 11. Tensions rose, the leaders were not released and police performed various intended evictions across the state, though none of these led to fatalities.

Initially the federal police force denied they were carrying guns, however, as evidence mounted, they were forced to admit that they were in possession of weapons. In addition to nine dead, the planned eviction on June 19 left over 100 people wounded and between 22 and 25 disappeared after a confrontation that lasted 15 hours — during which police used tear gas and automatic machine guns to repress the fierce protesters. Hospital workers on the scene were also attacked with tear gas.

Meanwhile Oaxaca’s Gov. Gabino Cue, who gave the order for police reinforcement in Nochixtlan, spent the evening at a wedding celebration.

Social networks were buzzing with activity and calls for solidarity. The morning after the fatal attacks, community radio and the church were informing people about the rebellion and calling them to participate in the barricades. The National Coordinator of Education Workers Union, or CNTE, a dissident movement within the government-affiliated national teachers union, released a statement demanding the resignation of Gov. Cue, while thousands took to the streets of Oaxaca city to raise their voices against police violence. “Fight, fight, fight, never stop fighting! For a laborers’, peasants’ and popular government!” the crowd shouted as they made their way towards the zocalo, or main square.

“We can’t negotiate about our deceased, there is no price they can pay for them,” said Victoria Tenopala Juárez, member of the Oaxacan Council of Autonomous Organizations and wife of political prisoner Cesar Leon Mendoza to the crowd in the square. “Unite! This fight is the people’s fight, and the reform affects us all.”

In 2014 Mexico’s ruling party — the Institutional Revolutionary Party, or PRI, led by President Enrique Peña Nieto — introduced a series of reforms to the health, energy, telecommunications and education sectors, among others. Ever since its proposal a year earlier, teachers slammed the education reform and its focus on labor policy, which they say is not actually concerned with the development of education and schools and is simply aimed at privatization. The recent local election of another PRI government in Oaxaca only confirms this tendency.

Protests to save public education and against the structural reforms have now taken place among many of Mexico’s labor unions, who demand an equal distribution of resources and an end to corruption in Mexico. “This is a very complex war. It did not start in Oaxaca. The teachers’ struggle, it is a global struggle. It started in Colombia, in Brazil, in Chile, in the United States — everywhere. And today we are in a war trying to say a very firm no to this kind of education,” Gustavo Esteva — an academic, La Jornada columnist and Oaxaca’s Earth University founder — told Democracy Now!“And we are saying no very firmly to all the so-called structural reforms that mean basically a change only of ownership.”

The teachers had demanded dialogue with the government ever since the introduction of the reforms, however, neither local nor federal governments conceded to any form of negotiation with the teachers until the morning of June 21 when the CNTE announced there would be a meeting with Interior Secretary Miguel Ángel Osorio Chong the next day. Aurelio Nuño, Secretary of Public Education, did not attend the meeting, and it was rescheduled to take place on June 27.

Already, the reform has had many debilitating effects for Oaxacan teachers. The most obvious are the precarious contracts and employment instability created by a standardized, nationwide evaluation, which will make it easier for teachers to be dismissed. Teachers in the states of Michoacán, Chiapas and Oaxaca have thus far largely resisted the execution of the evaluation. They defend their position by calling attention to how the reforms ignore the many cultural differences in a country as large and ethnically diverse as Mexico. “We aren’t against the evaluations,” said a teacher from the rural town of Tuxtepec. “We just want it to be a fair and contextualized one, that gives us a chance.”