In the community of Cerro de las Huertas, Ejutla de Crespo (Oaxaca) representatives of 48 communities and 30 social organizations participated on January 29 and 30 in the Conference of Communities and Organizations against Mining, in which they demand the state and federal governments for cancellation of all mining projects in Oaxaca. The goal, according to the “Colectivo Oaxaqueño en Defensa de los Territorios” and the organizing communities, was to create a space for reflection at the national level about the advancements and obstacles of the anti-mining movement in order to strengthen the resistance and defense of communities and organizations.

In the last 10 years, the federal government has licensed the majority of the community’s lands without any consultation process, free speech, or information with the people of the communities. According to the organization Educa A.C. and the Land Rights Observatory only in the state of Oaxaca there are more than 400 concessions, 35 mining projects, 2 of them operating. None of these concessions and / or projects with the consent of the peoples and communities.

The communal authorities of Capulálpam Mendez warned that mining only left orphans, widows and sadness in his people. “For this reason we have to say: Yes to life and no to mining“. 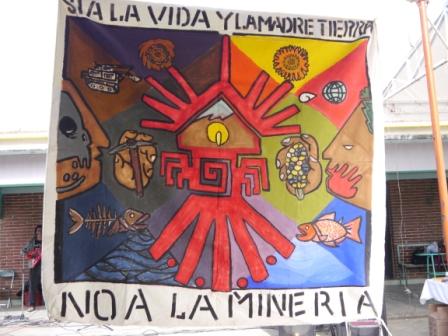 For their part, representatives of San José del Progreso demanded the cancellation of the mining property of Fortuna Silver Mines because “it was not consulted, divided the community, cost lives and now want to expand.”

And the community Monte del Toro denounced the harassment of agrarian production. In the declaration of the meeting, participants recall that “our territories support the economy and community and regional power, mining projects also seriously threaten those life forms, creating an irreversible pollution in our environment.” Organizations and communities made a call “to defend the land and the territory against the projects of death” and declared July 22 of each year as “Day of Resistance Against Mining” in Oaxaca.