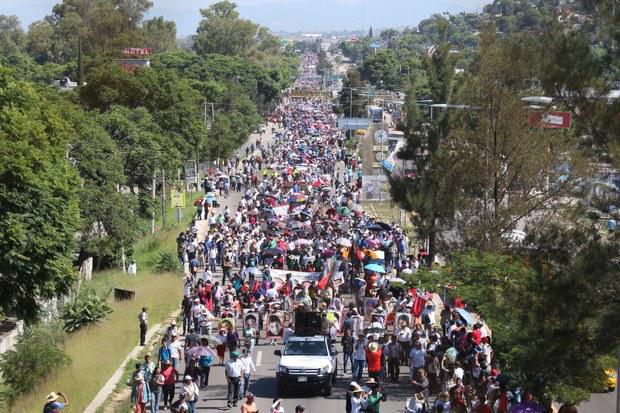 Despite the mass attendance at Monday’s protest, government officials said classes will begin as normal after summer vacation.

Some 30,000 teachers from the National Coordinator of Education Workers (CNTE) union took to the streets in the Mexican state of Oaxaca Monday, protesting against the government’s planned education reforms in the state that plans to essentially dissolve the union.

Members of the CNTE from 106 municipalities across the state joined in the city of Oaxaca, the region’s capital, for a mega march.

Last Tuesday, the governor of Oaxaca, Gabino Cue, and federal authorities announced plans to restructure the State Institute of Public Education, which had been controlled by the CNTE since 1992.

The mobilization was “peaceful and civil,” said Francisco Villalobos, the CNTE press secretary of Oaxaca, adding that teachers were protesting against the actions of the Mexican state that “undermine the labor rights of education workers across the country.”

Despite the mass attendance at Monday’s march, the Governor of Oaxaca said classes would still begin at the scheduled start date after summer vacations.

The CNTE union leaders in Oaxaca said that teachers will continue to organize civil resistance and social protests in the street.

Other CNTE protests took place in the states of Chiapas, Veracruz, Michoacan, Guerrero and Nuevo Leon.

Read more about the current political crisis in Oaxaca: