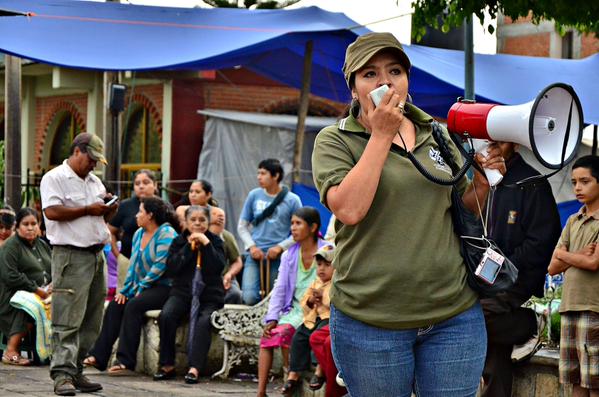 On January 28th, the Inter-American Commission on Human Rights (IACHR) released a report on the precautionary measures that have been requested for indigenous community police (or CRAC) leader Nestora Salgado, who currently requires medical attention while being deprived of her liberty at a maximum security prison in Nayarit, Mexico. She was arrested by police and military units on August 21st, 2013, and charged with aggravated kidnapping and organized crime.

Besides precautionary measures demanded to protect Salgado’s rights to life and personal integrity, the original request to the IACHR also denounced violations of her rights to due process, presumption of innocence and access to appropriate legal defense. As cited in the IAHCR report, “…due to the alleged ‘increase in violence, violent crimes and political corruption,” the proposed beneficiary decided to become “a human rights defender and participate in the movement in “defense of indigenous rights in Olianá, and led the organization of a group of Community Police in Olianá’.”

Gonza, Salgado’s representative before the IACHR, expressed that the Commission’s order was to grant her “immediate protection”. In its report, the Commission states that “Nestora Salgado García is in a serious and urgent situation, as her life and physical integrity are at risk.” The newspaper La Jornada reported the Mexican government’s response to the Commission, who claimed that Salgado is receiving adequate medical attention; however her family maintains that she continues to suffer from unrelenting pains.