Their names and their movements: 91 humans rights defenders who’ve been murdered in Mexico during the past 2.5 years of President AMLO’s term 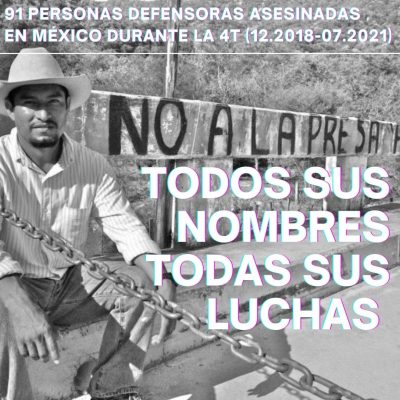 Human rights defenders in Mexico face grave risks for their involvement in social movements and the defense of their territories and rights.

As part of a country-wide effort to monitor and analyze this situation, EDUCA A.C. has tracked all the cases of murders of individuals who were identified as human rights defenders and whose deaths were denounced by human rights organizations.

For the greatest possible transparency, in each case we include the link to the bulletin of the organization that claims the defender. Since President López Obrador’s six-year term started in December 2018 up to July 30, 2021, 91 murders of human rights defenders have been reported. With this list, we want to remember their names and their struggles, and we join the demand for justice and an end to impunity.

Many attacks on human rights defenders, from minor attacks to assassinations, are not reported due to mistrust of the authorities or a fear of endangering family members and other activists in a context of total impunity. In Mexico, there are regions with a great capacity for public denunciation (organizations in Oaxaca denounced 16 murders) that contrast with regions where terror of those in power acting in complicity with the State have silenced any organized resistance (the state of Tamaulipas, for example, did not report a single murder). This makes it very difficult to compare data disaggregated by state. Furthermore, this list does not include the murders of journalists or activists that were not claimed and denounced by organizations.

It is a fundamental responsibility of the Mexican state to prosecute the intellectual and material authors of these murders, to end the impunity in the country and guarantee the protection of human rights defenders.