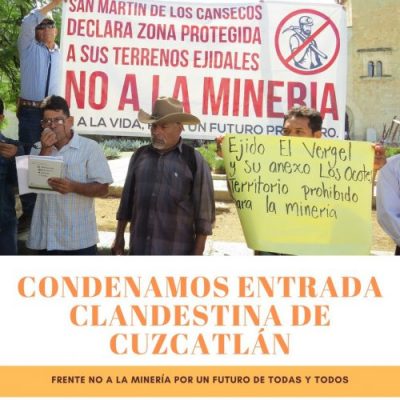 On June 23, PBI-Mexico tweeted this excerpt of a statement from the No to Mining Front for a Future of All in opposition to the action of Vancouver-based Fortuna Silver Mines and its subsidiary Cuzcatlán in Oaxaca, Mexico:

“These actions of the company constitute a serious crime against the communities, since they are carrying out actions against the decisions that were already taken by our previous assemblies”, warns Frente NO to mining.

The statement from the No to Mining Front highlights:

“Over the past few years, we have fought hard to get him out of our territories and our homes. Through different institutional channels we notified our decision directly to the mining company, the Ministry of the Interior and the Ministry of Environment and Natural Resources: Compañía minera Cuzcatlán and Fortuna Silver Mines does not have the consent of our communities to operate in our territories!

In the last two weeks, the mining company has clandestinely broken into the territories of Magdalena Ocotlán, Monte del Toro and San Martín de los Cansecos offering citizens homes and houses, flouting the decision of our assemblies expressed in our declarations of prohibited territory for mining and violating our right to self-determination and community peace.

These actions of the company constitute a serious crime against the communities, since they are carrying out actions against the decisions that were already taken by our previous assemblies. It is important to note that these assemblies with their respective minutes are legally binding by the municipal and agrarian route, so that the arrival of workers of the mining company without our consent is a clear violation of our internal regulatory systems.”

“In the event that Minera Cuzcatlán continues to flout our decisions and continues to enter our communities without our permission, the No to Mining Front, made up of 14 Zapotec communities of the Central Valleys, will take the necessary measures in order to put an energetic stop to its illegal action. If the federal government does not intervene, we will guarantee our right to self-determination, territory, a healthy environment and community peace.”

In March 2009, residents protested the lack of consultation and consent for the mine by setting up an encampment at the site of the mine. By May of that year, 1,000 state and federal police evicted that encampment using helicopters, tear gas and dogs.

The mine began operating in September 2011.

El Universal reports there have been four deaths and eight people shot in direct relation to the mine between 2010 and 2012.

Community leader Bernardo Méndez was killed on January 18, 2012, after he and others confronted a municipal crew working on a water pipeline they suspected would divert water for use at the mine. And Bernardo Vásquez was killed on March 15, 2012, as he travelled back home from the Oaxaca airport.

A new permit was granted to Fortuna/Cuzcatlan on December 14, 2021.

Publication Source: PBI-Mexico amplifies No to Mining Front statement in opposition to the actions of Canadian mining company Fortuna Silver in Oaxaca