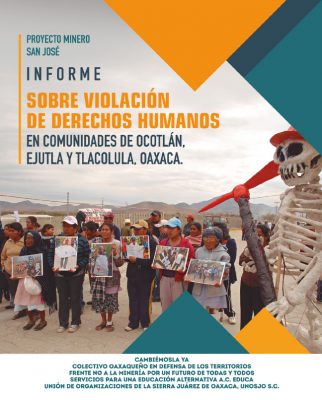 San José mining project. Report on the violation of human rights in the communities of Ocotlán, Ejutla and Tlacolula, Oaxaca

This report assesses the impact on human rights of the “San José” and “San José II” mining projects belonging to the Compañía Minera Cuzcatlán SA de CV – a subsidiary of Fortuna Silver Mines (FSM) – in the communities of Ocotlán, Ejutla and Tlacolula in the Central Valleys of Oaxaca.

This report is the result of more than a decade of community organization and defense in the Central Valleys of Oaxaca, against the imposition of the “San Jose” mining project of the Cuzcatlan Mining Company, a subsidiary of the Canadian company Fortuna Silver Mines.

The defense of the territory and demands for respect for the right to self-determination, territory and a healthy environment have been a titanic task for organized communities in the No to Mining for a Future of All Front (Frente No a la Minería por un Futuro de Todas y Todos), against the economic interests of the Canadian company, which has concessions in 80,000 hectares of the Central Valleys since 2002.

The objectives of this report are:

a) To document the impacts on human rights of the “San Jose” mining project and its expansion “San Jose II” in communities of the Central Valleys of Oaxaca;

b) To build legal arguments for the collective rights, respect and guarantee of the rights of indigenous peoples;

c) To demand the Mexican State for an interpellation on the importance of respecting indigenous rights in the face of private investment projects.

To this end, the report deepens into Community-Based Human Rights Impact Assessments (COBHRA), a methodology built to enforce the collective rights of communities in the face of investment projects.

We have documented great inequalities and poverty in the mining regions and in the affected communities. The environmental, social, and financial dimensions of “San José” and its expansion “San José II” are described based on information provided by the Mexican State and the mining company.

The report describes the communities’ way of organization, main defense actions, as well as the implications and effects generated by the “San Jose” project.

It also includes an analysis of the impact on human rights contrasted against the main laws and agreements ratified by the Mexican State against the facts denounced by the affected communities. Finally, an urgent and strong call is made to the Canadian and Mexican governments to cancel the “San Jose” project and regulate the mining industry.

Ten years after the murders of Bernardo Mendez and Bernardo Vasquez, we continue to demand:

FOR MORE INFORMATION: Community-based HRIAs, according to Oxfam, “carry the potential to completely change the nature of the dialogue between companies and communities affected by their operations. If communities come with their own evidence-based analysis, companies will need to acknowledge communities´ perspectives and engage with them.”