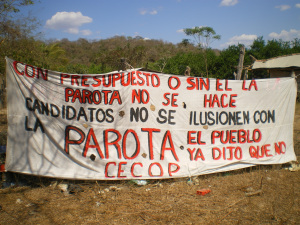 Last Saturday, November 15th, 5 people died and 6 women were injured during a scuffle in the community of La Concepcion, a short distance from Acapulco, Guerrero. The townspeople of La Concepcion, belonging to the communal lands of Cacahuatepec, went into mourning after the deadly confrontation between the towns’ inhabitants, a conflict whose roots lie in the clash between transnational megaproject investments for the construction of a 765 megawatt hydroelectric dam in the region, and the local community.

The core of the conflict stems from the tension between the Council of Ejidos and Communities Opposed to La Parota Dam (CECOP), who have been resisting the Federal Electricity Commission’s hydroelectric dam ‘La Parota’ in the basin of the Papagayo River and struggling to protect their land for the last 11 years,  and the workers of the Kimbar gravel company – headed by Humberto Martin and accused by the council for employing armed staff.

In January this year members of the CECOP decided to create a Communal Self-Defense Police group in the commons of Cacahuatepec, in order to grant the movement and its supporters further protection against the armed gravel workers. At the time, CECOP spokesperson Antonio Suástegui declared “that the movement had always been peaceful and legal, but that there was no other option but to take arms”. In mid June, Suastegui was arrested during a military and police occupation of the region, and brought to a maximum security prison in the state of Nayarit. The Council responded to this detention and further pressures from the government to impose the project with a barricade in La Concepcion, which allowed them to hinder further extraction of the rivers’ minerals and preserve control of the access to the entrance of the community.

The incident last Saturday is the second violent act towards members of the CECOP this year. Celerino Garcia Hernandez and Salomon Hernandez, members of the CECOP were killed that day, as well as the three gravel workers Pedro Bailon Dorantes, Antonio Garcia Andres and Andres Palma. Rogelio Teliz, lawyer from the Tlachinollan Mountain Center for Human Rights, backed the statement that the recent attack employed the same method as the first of the two incidents in April, saying that the gravel workers attacked the dam opposition members, while the FGE General State Prosecutor accused these of being the aggressors.

In an article in La Jornada Guerrero, the farmers belonging to the opposition group confirm that “it was a planned act, the attack against the CECOP” in regards to shooting in front of the Communal Police headquarters last Saturday. The evidence of two cars, in which the Kimbar gravel workers arrived, parked to protect them from the bullets, as well as the discovery of the missing end of a rope for the village alarm bell found in one of the vehicles in the aftermath of the shooting, pointed towards a planned attack by the gravel worker sympathizers.

While members of the CECOP grieve for Celerino Garcia Hernandez’s death at his funeral, the Kimbar worker sympathizers mourn their own three dead, shot in the confrontation, and defend their position that the CECOP is damaging the community, initiated the fight and attacked the workers.

Further information on the CECOP (in english) on SIPAZ